The first café débat of the Institute of Law

Life is never dull at the Institute of Law, last night was the inauguration of the Café débats. The event was open by David Myatt, the French Honorary Consul.

At  the start of the evening, some participants were wondering how they could be debating about cars (the chosen subject for the evening). To start the discussion, each table had a  couple of questions prepared and it wasn’t long before all participants were fully engaged in exchanging views on subjects such as:

The hour and half flew by and and it was a pleasure to see everyone buzzing and least of all surprised at how much they had to say about cars.

The table leader stood up to summarise the findings of the discussions that had taken place round their table and the general consensus was that everyone could have talked a lot longer on any of the questions and that everyone had a lot more to say about cars and their impact on our daily life than they thought they had at the beginning of the session.

The aim of the event has been achieved, getting people to speak, in French about a subject they thought they had nothing to say about. Expressing their views and supporting them with relevant arguments but also listening to different point of view without being afraid to question each other. 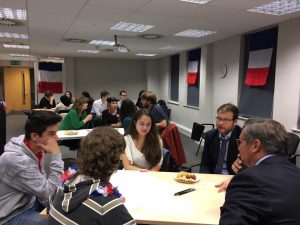 A special thank you to David Myatt , Xavier Souris and Catherine Grynfogel & all students for their participation this evening and of course Bruno’s Bakery for kindly providing sustenance for the event.