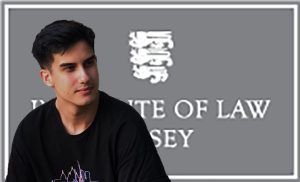 Congratulations to Benjamin Machet! Benjamin has been offered places to study for a LL.M. with several high ranking universities.

Spoilt for choice, Benjamin had to make a hard decision, but has now opted to study the double LL.M. programme of at Queen Mary and Sorbonne Law School. We wish him well with his future studies.

Benjamin started studying Law on the Institute of Law Double degree programme in 2017. He spent his first two years of undergraduate studies in Jersey. As part of the programme, he obtained a Certificate in Higher Education in Common Law from the University of London in 2018.

Sharing the news of his success, Benjamin warmly thanked his lecturers and tutors at the Institute who supported him in achieving admission on the LL.M. programme. Benjamin will be back though, as he hopes to come back to Jersey to undertake work experience as part of his master’s programme.