The Chief Executive and Dean has overall responsibility for the executive management of the Institute of Law and for its day-to-day direction. He is accountable to the Board of Governors for the exercise of these responsibilities and is assisted by members of the Executive Team. 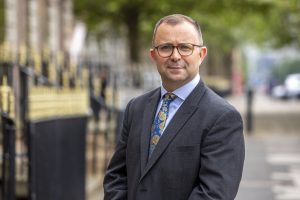 The Governing Body appointed Dr Humphreys as Interim Chief Executive and Dean of the Institute of Law in Jersey in June 2021.

Dr Humphreys is an experienced Higher Education consultant who has worked in a variety of senior roles across a wide range of institutions in the UK.

These have included interim roles as Director of Strategic Planning and Insight, Registrar, and Strategic Change Consultant, as well as acting as consultant to a number of Vice Chancellors and Deputy Vice Chancellors on specific change projects.

Prior to these roles, Mark held senior permanent roles in both traditional and for-profit universities, including a period as Head of Registry, Planning and Scheduling at the BPP Professional Education Group.  Here he gained significant experience of the legal training landscape in England and Wales, including close working with the SRA and BSB.  In one of his previous roles at SOAS, University of London, Mark had responsibility for elements of support for courses offered by the University of London External Programme.

Born in Wirral, Mark was educated at Wirral Grammar School for Boys and, subsequently, at the University of Sheffield, where he graduated with a First Class Honours degree in Music.  He was then awarded a Masters with Distinction in Music from the University of Manchester, and won an Arts and Humanities Research Board scholarship to study for his D.Phil. at the University of Oxford.  Mark is a conductor and singer with a particular interest in opera and music of the baroque period.

Born in New Zealand, Sasha studied law and history and graduated with an LLB and BA from Otago University in 1995. She was awarded a first class Master’s degree in international human rights law from the University of Oxford in 2009 and she obtained her PhD from King’s College London in 2018.

Sasha has a genuine love for teaching and considers it fundamental to promote critical thinking and student engagement in the classroom. She has designed and delivered university courses on a variety of subjects, including human rights law, public law, jurisprudence and the legal system. She has taught law in New Zealand, London and Jersey.

Sasha has ten years’ practising experience to bring to her role in the classroom and she continues to foster strong relationships with industry and external organisations in her field. Most recently, she has partnered with the Families Together Programme at the British Red Cross to produce legal and policy research which will form the basis for advocacy and legal reform.

Sasha’s academic research focuses on human rights, women, children and refugees. She is particularly interested in factors that inform the boundaries of human rights laws and the efficacy of human rights in practice. Her PhD research applied a critical legal understanding to laws preventing family reunion for refugee women in polygamous marriages, interrogating the credibility of immigration laws and human rights standards from a feminist and post-colonial standpoint, seeking to elevate the voices of women who often occupy a neglected space in the creation of laws and rights.

Damian joined the Institute of Law in November 2019 and is responsible for overseeing all  administrative functions. Prior to joining the Institute, Damian was a manager of a large retail organisation. He has over twenty years’ experience in sales, project management, human resources, budgeting and database maintenance. Damian moved to Jersey in 2006 and is a keen inline hockey player. He established the Jersey Seawolves Hockey Club in 2014.